Cyndy Hollman was born on a farm in the country side of New York.  She has nine brothers and sisters.  She never dreamed of becoming a pilot like some might think but, when one opportunity lead to another, Cyndy jumped at the chance.  While majoring in Biology at the College of Charleston and working at a local restaurant, a customer asked her if she wanted to go for a flight.  That first flight in a C152 changed her life forever.   Upon completion of college, Cyndy worked as a paramedic and continued to work on all of her certificates and ratings.  Once she obtained her Certified Flight Instructor, she had the opportunity to teach at the Charleston AFB Aeroclub.  After teaching students to fly for over 1,200 hours, she accepted a job flying checks with Ram Air Freight.  The job was short lived as she was soon offered a job flying King Airs for private owners back in Charleston, SC.

After building several hundred hours in BE 90s, 200s and 300s, Cyndy was able to obtain her ATP and apply for the regional airlines.  She was immediately offered a First Officer position on the Dornier 328J with Atlantic Coast Airlines (ACA).  Three years later, ACA became Independence Air, a major carrier.  Seventeen months later, the company fell into bankruptcy. Once Cyndy was furloughed, she thought about all of the aviation opportunities that had been offered to her.  She knew after all of those experiences, her passion was in teaching others the gift of flight.

For the past ten years, Cyndy has followed her heart and helped hundreds of students, old and young, reach their goals from Private Pilot up to Airline Transport Pilot.  Accumulating over 11,000 hours total time and over 8,500 dual given, Cyndy is excited every day to teach what she has learned to others.  Her students boast about her patience and her ability to simplify even the most difficult subjects.  She believes in teaching a student more than just learning to fly; she believes in teaching a student to become a Pilot who is comfortable flying almost anywhere.  If you ask Cyndy if she ever grows tired of teaching, you will see her light up as she describes a new student's reaction to their first solo experience or the first time they fly through a cloud.  Cyndy plans to continue instructing professionally as long as there are students wanting to learn the amazing gift of becoming a pilot.

Tyler Agee was born in Atlanta, GA in 1994 and grew up in the suburbs of Suwanee, GA with one younger sister. Growing up, Tyler spent his time heavily involved with sports: starting with baseball and basketball before settling on football and lacrosse in high school. He graduated from the University of Georgia in 2017 with a degree in Business Operations Management and with the ultimate goal of becoming a pilot.

His first interest in aviation was at 7 years old, going to a Georgia restaurant at KPDK to watch planes takeoff and land while enjoying a burger and fries. From there the interest grew as he was able to tour the cockpit of Boeing 757 as well as attending a Navy Blue Angels air show in Rome, GA.

While working full-time after college in the transportation & logistics industry he continued to consider chasing his dreams of being a pilot. With the help of his wife Kerri and their Pastor Randy who is a Delta 737 captain, they both encouraged Tyler to take the chance and go on a discovery flight in January of 2019. Tyler loved the experience and shortly started flight school in Lawrenceville, GA in the summer of 2019. Over the next year Tyler obtained certificates from Private all the way to CFII in the PA-28 & C-172 aircraft. He completed all of his Solo Cross Country as well as Instrument cross country flights to Anderson.

During his free time, Tyler as a long-suffering fan, spends his time watching UGA, Braves, and Falcons games. In addition he loves to travel, specifically to new states/countries  for sports, hiking, and whitewater rafting. His favorite places to be are in the air, on the water, golf course, or at a sports game. He lives by the cliche that “if you love what you do you never work a day in your life”, Being a pilot is that for him. 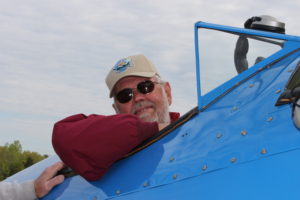 Dale Ellis spent his early years in Colorado, where he soared through the skies across mountainous terrain and beautiful lakes. Although he says his career in aviation spans more decades then he cares to count, his students are grateful for his vast experience.

Dale's career as flight instructor began in 1972. In addition to instructing, Dale was a charter pilot for Sawyer Aviation in Phoenix, AZ. A short time later, he became Chief Pilot for Air Taxi operators spanning from Colorado to Texas.

As well as charter operations, Dale also professional flew for Piedmont Airlines (formerly Henson Airlines). He flew both Shorts Brothers SD3-30s and Dehavilland Dash-8s for over 20 years. With this experience, he was able to provide new pilots with ground instruction as well as a flight instruction for both models. Later in his airline career, he was a Line-Check Airman on the Dash-8.

Dale is excited to return to the world of flight training and share his wealth of knowledge and experience he has accumulated over the years. Dale has a talent for explaining complex subjects in a simplistic manner. His passion for aviation is highlighted through his enthusiasm and patience while teaching aviation skills to new students.